The distillation is a kind of thermodynamic separation process. It can evaporate components with low boiling points by utilizing that the boiling point of each component in the mixed liquid or liquid-solid mixture is different, and then condense the material to separate the whole components. It is the combination of evaporation and condensation unit operations. So what is molecular distillation?

The molecular distillation is a kind of distillation technology carried out under a high vacuum. In this case, the average free path of steam molecules is greater than the distance between the evaporation surface and the condensation surface. Hence, the liquid mixtures can be separated by utilizing the difference of the evaporation rate of each component in the liquid. 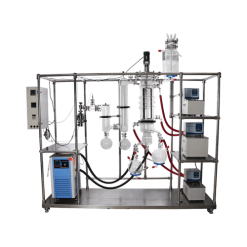