Both rotary evaporators and thin film evaporators can be used for evaporation. What are their differences and similarities in particular?

What is a Rotary Evaporator?

A rotary evaporator (rotovap or roatvap) refers to a kind of equipment for solvent evaporation under reduced pressure, which is composed of a vacuum system, a heated water or oil bath, a condenser and a motor that rotates the evaporation flask. As its name suggests, what is special is that the evaporation flask can rotate. A rotary evaporator is mainly used for the process of evaporation, concentration, crystallization, drying, separation, and solvent recovery, and especially used for the continuous distillation of large amounts of volatile solvents under reduced pressure.

What is a Thin Film Evaporator?

A thin film evaporator is a type of evaporator as well. Its feature is that the material liquid can flow in the form of film along the wall of heating tube for heat transfer and evaporation. It has the advantages of high efficiency of heat transfer, fast evaporation speed and short retention time of material. Thus it is especially suitable for the evaporation of heat sensitive material.

What are Differences Between Them?

A rotavap evaporates solvents from samples by utilizing the principle that the solvent will have a lower boiling point at a reduced pressure. Specifically speaking, the stepless speed regulation is adopted to make the evaporation flask rotate at a constant speed. By the rotation, materials can form a large area of uniform thin film on the inner wall of the flask. The evaporation flask is heated evenly by a water or oil bath, and materials, with a lower boiling point, is evaporated rapidly under the vacuum condition. The solvent steam is recycled in the receiving flask after being cooled by the high efficiency glass condenser.

A thin film evaporator has a totally different evaporation process. After being preheated to a certain temperature, the liquid can enter the evaporator from its upper part, and is divided into several flows into the inner wall of the cylinder by a rotating liquid distributor. Every flow can form a uniform liquid film on the heating wall. The liquid film is gradually concentrated by rapid and repeated evaporation. The secondary steam can go through the outlet and be condensed in the external condenser. The condenser usually takes the water at room temperature as the cooling medium. Since evaporation is generally a boiling evaporation process with bubbles and splash liquid, the entrapped droplets need to be removed through a foam separator before the secondary steam are condensed.

The turbine and worm of a rotary evaporator are driven by motor deceleration and equipped with high strength nylon wheels so that the operation is smooth and the noise is small. The rotor drive of a thin film evaporator is that the form of motor, reducer, scraper determine the rotor speed.

What are Types of Evaporators? 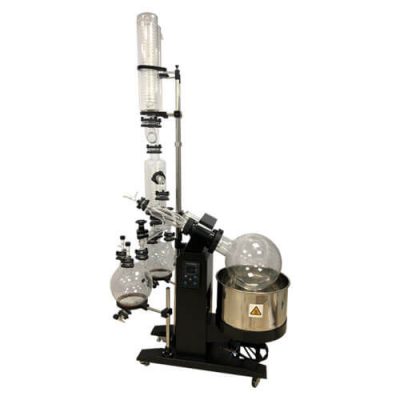 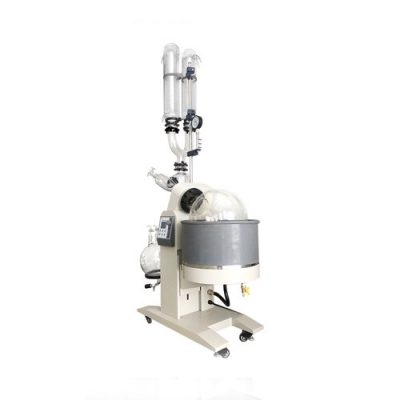 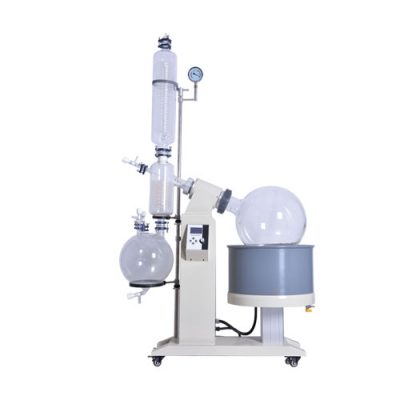 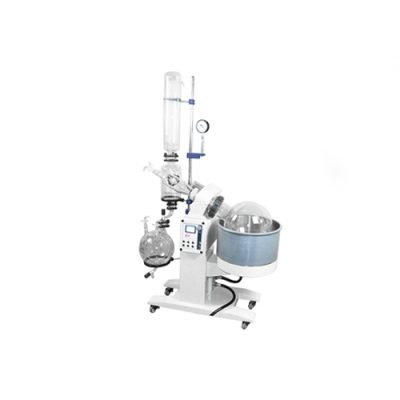 How We can Use Rotary Evaporator for Extraction?

What is the Primary Advantage of a Rotary Evaporator over Distillation？