Rotary evaporator has fine structure and many glass components. It will damage the instrument if it is not carefully transported and packed, and even cause structural changes, which will reduce the precision and shorten the service life of rotatory evaporator.So what should we pay attention to when packing and transporting rotavap?

Precautions during carrying a rotary evaporator

1,The rotary evaporator must be carried by measuring stuff.Touching and inclined are not allowed.

2,The rotary evaporator must be consigned in a cushioned shockproof box,marked the words “not inclined” on the outside of the box and optical or electrical instruments,handle with care,placed lightly ,strictly prohibited of heavy pressure and escorted if necessary on the equipment.

3,The rotary evaporator in motor transport should prevent turbulence and vibration,generally should placed in the front of the soft cushion,or by people holding on the legs or carried on the back.Placed on the bottom of the cabinet is not allowed.

4,When moving the rotary evaporator for a short distance,spin steam should be held vertically so that the instrument can keep the pump state of vertical and it shouldn’t be carried horizontally on the shoulder to avoid damaging the device or the shaft system of spin system.

Precautions when Unpacking, packing and closing the rotary.

1，After the rotary evaporator is turned on, familiarize with the corresponding positions of all components. When removing the device, holding the holder with one hand and the base with the other hand or slowly remove the bracket with both hands.It is strictly prohibited to use the hand held horizontal shaft.

2,Fixing the tripod before removing the instrument,Place it on the tripod immediately after removing it and fix it with the center screw.

3. the observers of Rotatory evaporator must not leave the instrument before packing.

4. When packing rotatory evaporator, the brake screw should be fixed or released according to the type of instrument, and the box cover can be closed gently and the hook on both sides can be fastened after all parts are properly placed in their respective positions.

6,when the box and the cover is abnormal we should find the reason before covering. Hard pressing and covering are strictly prohibited.

Please pay attention to the tips above during transport.If you receive the goods and still find some broken glasses,we will replace a new glass component free of charge for you to protect your interests.If you find the malfunction of the rotary evaporator decreasing motor during the use of the rotary evaporator,you can consult our company’s website to get the solution.

Thin film evaporator is a kind of evaporator.It is a way to evaporate by rotating scraper which formed a film enforceable. This method has advantages of high heat transfer coefficient, high evaporation intensity, short flow time and high flexibility of operation,Especially suitable for dissolving, evaporation concentration, distillation of

What’s the difference between vacuum rotary and film evaporator?

The vacuum rotary evaporator uses the circulating pump to pump the vacuum from the feeding port.The material enters into the flask and heated by the water bath,then the flask begin to work ,the material inside the rotating bottle is heated and evaporated to the condensing pipe in a vacuum state. because the coil temperature inside the condensing pipe is low, the evaporated air immediately liquefies and falls to the collection bottle.

From the perspective of drive mode:

The rotor driving device of thin film evaporator is motor, reducer, and the form of scraper determines the rotor speed.The turbine and worm of vacuum rotary evaporator are driven by motor deceleration and equipped with high strength nylon wheels so that the operation is smooth and the noise is small.

How to use a rotovap 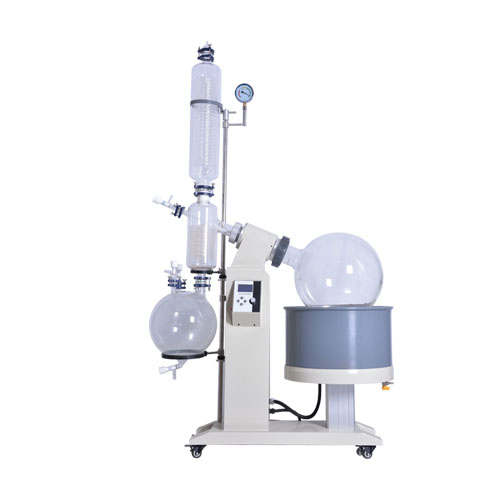