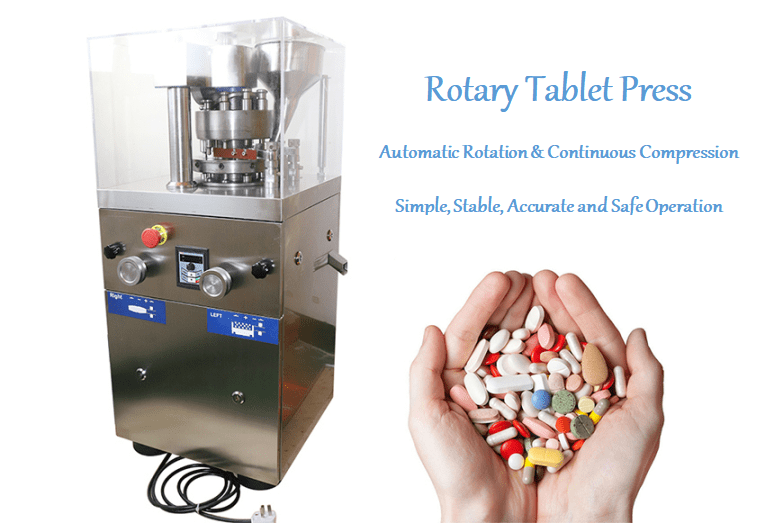 The rotary tablet press machine, also known as multi-station tablet machine, is regarded as a key device used in the production of tablets. Developed based on the single punch tablet press, it can continuously complete a series of operation, including filing, compression, ejection and other operations. Its invention has overcome the shortcomings of single punch tablet press and increasingly developed and improved, greatly enhancing tablets’ output and quality.

What is Rotary Tablet Press Machine?

The rotary tablet press machine refers to a kind of tablet press that can continuously compress tablets in the rotating form. It utilizes several dies that are evenly distributed on the turret to do vertical reciprocating motion along a certain trajectory. The speed of the turret, filling depth of material and thickness of tablets can all be regulated.

How does a Rotary Tablet Press Work?

A rotary tablet press is mainly composed of the base, turbine box, turret, cam, pressure roller, feeder and other components. Its working principle can simply concluded as follows.

The granular materials meeting certain requirements can pass through the feeder to flow into the die holes by the rotary motion of the turret, and these materials can be compressed into tablets by several dies evenly distributed on the turret under the action of the pressure roller. At the same time, the upper and lower punches can do lifting motion along the cam to realize the purpose of compressing tablets.

What are Advantages of a Rotary Tablet Press?

Compared to a single punch tablet press, a rotary tablet press has a great variety of advantages.

What is a Tablet Press Machine?

The tablet is a kind of widely used solid preparation, which is convenient to take, [...]

What is a Single Punch Tablet Press and How does it Work?

There are mainly two types of tableting machines, which are single station tablet press and [...]